We Did Something Last Night...

We brought the baby into bed with us! 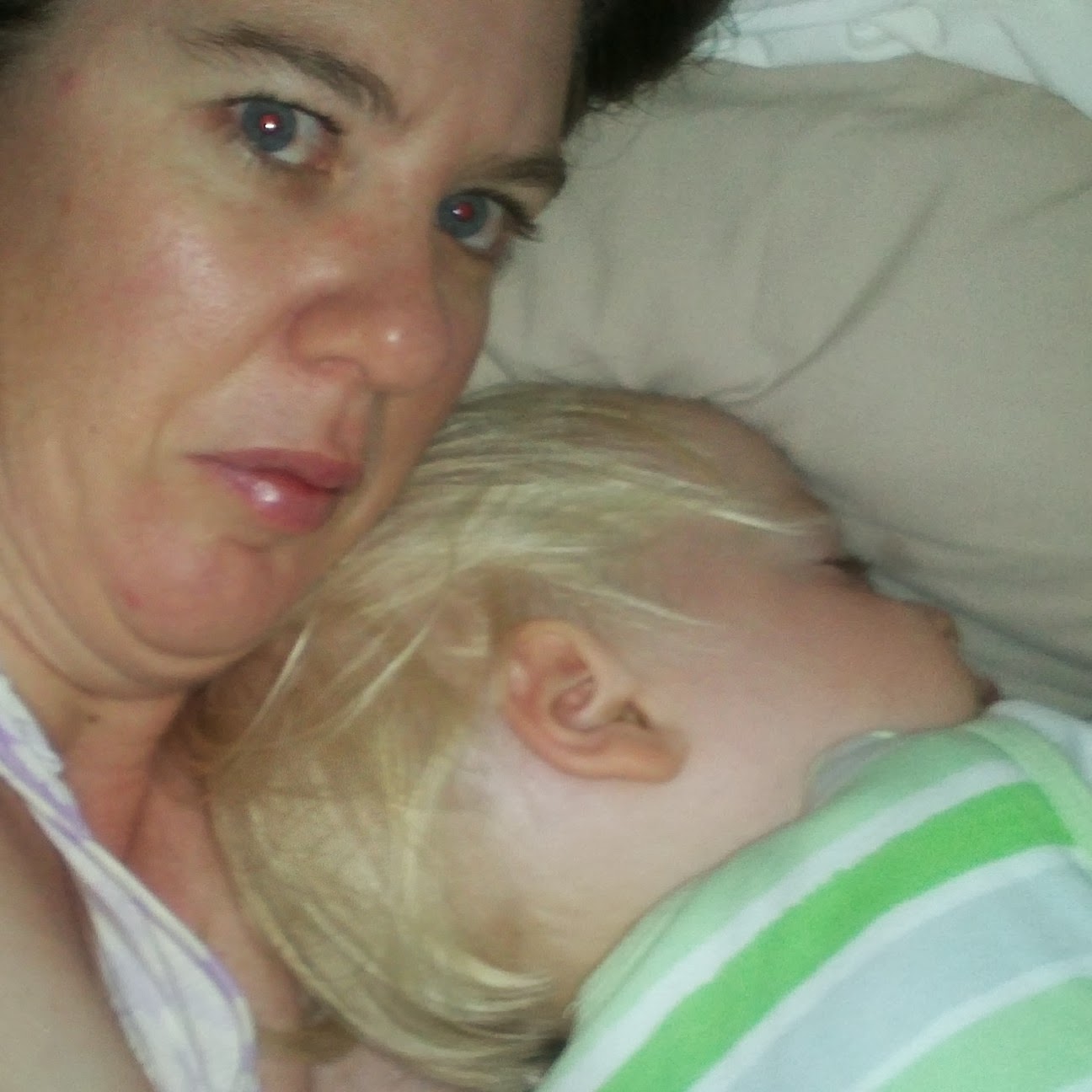 I have even got photographic evidence, I took four photos and he never even woke up... pretty amazing, and proof of just how tired he was (please excuse the triple-chin-effect, I had minimal movement and just couldn't get a decent pose *grin*)!

See the poor little soul has a heavy cold, and if you've been reading the last few posts you will know he is not a good sleeper at the moment anyway - add that to a heavy cold, and you can see how our night started out! Well, I should be honest and say how hubby's night started out - I have yet another infection, and was in so much pain, and so tired last night; he just left me sleeping. What a honey! 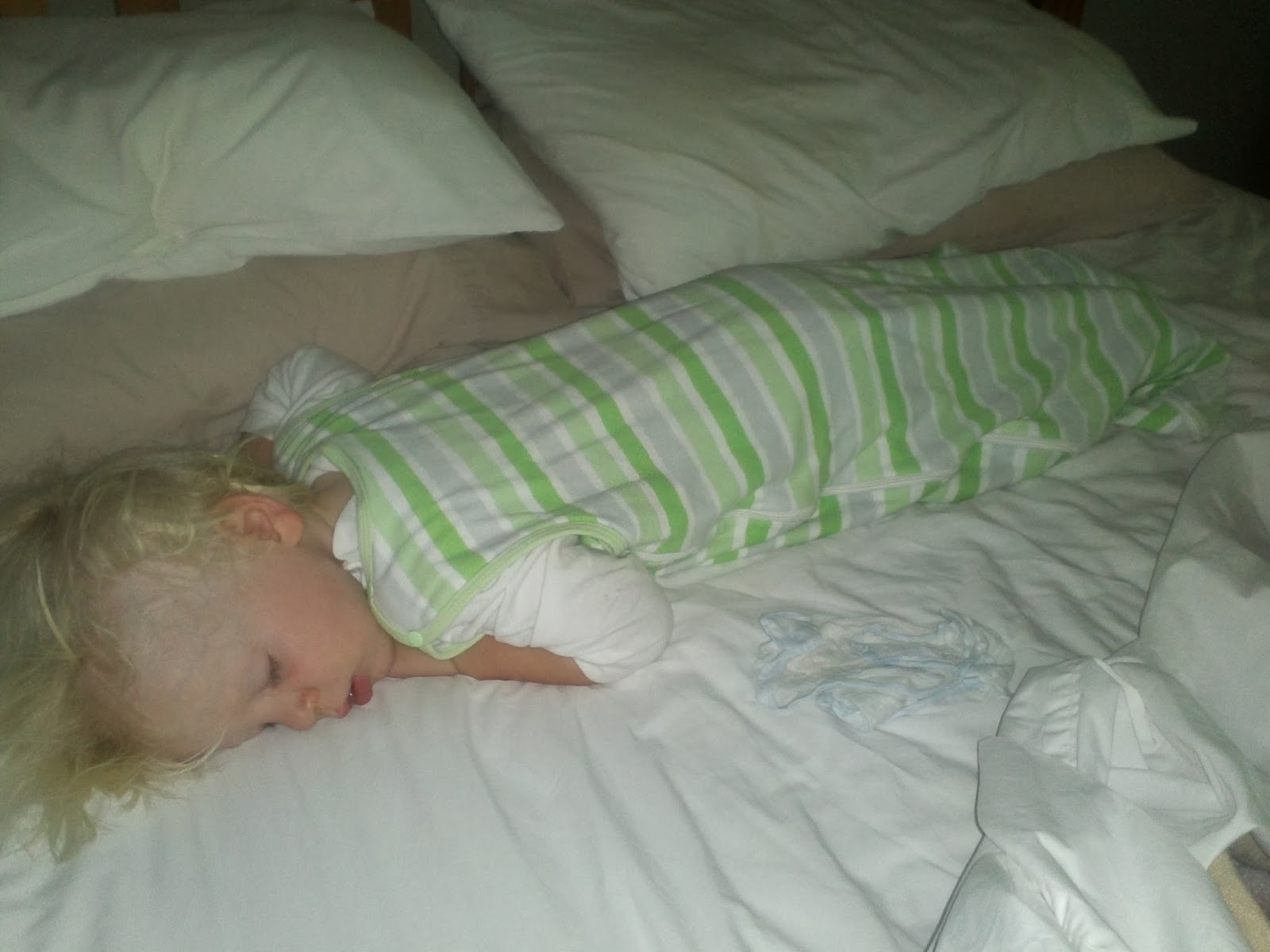 So there he is in all his sleeping glory... sideways across the middle of our bed - no less; not much room for anyone else really!

I had had to get up and settle Button after a bad dream at about 4am - she had also begged to come upstairs, but I denied her knowing Hubby needed sleep... So when 'lil M was brought into bed less than half an hour later I was feeling a tad bit guilty!

But unlike his sister, who tends to wiggle and giggle when in bed with us (probably because it is generally morning and time to get up anyway), he was a pro and promptly fell asleep again. Considering he has never slept in our bed before with us, I thought it was going to be an horrific night - but overall it went reasonably smoothly... I did get some sleep at some stage during the next three hours, but I'm not sure if Hubby did. He had to get up just before 6:30am and head out the door by 7am for work; but left me lying in bed snuggling a sleeping baby - I have to admit to that part being rather delicious!

When I did get up - Hubby had made everyone's breakfast, and the table was set all ready to go; what a hero! He has been magnificent recently; I have been sick for about two weeks now and have thus had little ability to do anything - so he has done the majority of the night shifts, as well as picking up the slack with the housework, and even taking on dinner on a few occasions. I am one blessed woman! SO GRATEFUL!

Ultimately - after the reasonable success of last night, I think we'd do it again if the need arose... we all got more sleep than we would have, had we had to take turns trying to settle a very unsettled baby for the next few hours. But, despite feeling more awake than I was expecting to this morning, I don't think we'll be attempting this too regularly - I value my sleep too much!!!!

kiwimeskreations said…
Sounds like our household - many years ago!
Praying for you all
Love and blessings
M
24 February 2014 at 18:02

Amy said…
Awwww, very cute. And I've been there, done that. Anything (almost) goes when you're desperate for some sleep...usually I end up in the small boy's bed, or with him on the couch until he's in a deep sleep, then return to 'normal' sleeping arrangements, although sometimes it's simply easier to be closer if he is waking every hour! I hope your sleep improves this week. Mr C is being a legend!
26 February 2014 at 06:23