Trying Out The New Mobile App

March 06, 2016
Hello - it's been a long while since I have written, was off all social media (except Pinterest) over Feb; which turned out to be the perfect time, as we became rather busy!

Tonight I am writing this on the new mobile app on my phone (let me justify that with a 'new to me', rather than just a general new)! I am intrigued to see if it will be easier, more portable & thus may encourage me to consider writing more. Maybe...

So a lot of things have changed in the past month or so - I warned you 2016 is going to be epic, & it has certainly lived up to that so far! Although not everything is perfect of course, it has still been an amazing start to the year! I had hoped we would have two big pieces of news to share - it had started to look like Button had outgrown her allergies, which we were pretty excited about. We hadn't been able to give her dairy chocolate without very quick & strong reactions; but she can now handle a little bit of chocolate with no side effects at all - not even a rash around her mouth, this is a small miracle! However, as time went on & we upped her dairy intake, we noticed small reactions starting to show up again - as disappointing as this was, it is still progress, & it allows me to send her to parties without sleepless nights leading up to it. So we keep the dairy intake minimal at home (which isn't hard when her Dad is also allergic), so her system copes when she is away from home & people aren't aware.

On a more serious note - it appears Hubby's allergies are getting stronger and more severe... Not in a life-threatening severe kind of way, rather a full body sickness kind of way. For him - both gluten and dairy cause severe stomach problems, but they also cause lethargy & muscle pain, extreme tiredness, back ache & nausea. It's horrible watching him go through an attack - they seem to be happening more often now, & after less and less exposure. We tend to cut down on the allergens in the house, but he tries not to put other people out - so will have that cup of tea or coffee with milk, rather than make 'a fuss'... But we are slowly coming to the realisation that for his own health, & my sanity - he is going to have to start 'making a fuss', & take his own milk & food to places ALL.THE.TIME!  He is in bed early tonight due to another attack, small things like a couple of hot drinks out with milk in, a bit of cheese in the salad, & quite possibly a packet of chippies are all that have caused this attack. So it will be back to plain food, & back to the drawing board for us this week... He has been loosely following the low fodmap diet, but I am getting quite interested in the GAPS diet (Gaps stands for Gut & Psychology Syndrome), I have heard a lot of good things about it, & it appears to a way of eating that heals the gut, not just stabilises it. So once you have done the extreme cleansing part, you can then start to reintroduce foods, & some folk have been able to reintroduce allergen food with positive results. If you do it though, you have to be committed - it's a hard diet to follow initially... So it is something we'd have to decide together, & be prepared for some sacrifices. He also has fructose malabsorption, which I am still getting my head around - I am doing better, but will still make the odd dinner that doesn't sit well in him, due to just forgetting how fragile his system is *sigh*. The weight has been falling off him lately, it is a bit worrying as he isn't big anyway - he is a exercise freak, but has realised he is actually going to need to settle down for now, as it's not doing him any good (opposite to the vast majority of us). So he has quit biking the 20kms a week he was doing, & has swapped his running for walking - I am much happier about that... He has also quit coffee, & has found he sleeps a whole lot better, & is much calmer - especially with the kids. So lots of small but positive change happening, we just need to ramp it up a bit on the food side of things, so he doesn't have to suffer as much as he has been doing lately.

But - onto the best and BIGGEST piece of news... We have purchased our first home; it went unconditional on Thursday (not without it's hiccup's though, almost threw it all in)! We don't take possession until May 6th, which makes for a long settlement. This, understandably, was a big hiccup - the house is vacant, & I am sure that the Vendor would have preferred a shorter settlement, but Kiwisaver has been the deciding factor here, & after hearing 3 different stories from 3 different people - it has taken a while to decipher the truth & try to make it work for everyone. 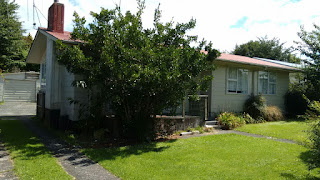 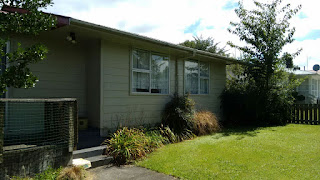 BUT - WE STILL HAVE OUR OWN HOME! Which is worth capitalising, & worth remembering; it is worth all the stress & headaches at the end of the day!

It is very small (80sqm), & has been a rental for a number of years - so as you can imagine, it requires a fair bit of work (including a new kitchen)! But we have been lucky enough to prove the old adage right - worst house on the best street; & hopefully that means with a bit of work, it'll provide a useful asset! The idea is that within two years we going to extend & basically double the size of the house, & because we got such a good deal & it's in such a good area - we (theoretically) won't be over-captialising, even down here.

We have loads and loads of plans and dream's for this place, both outside and inside - but for the first two years it'll be cosy living... However I had 4 criteria:
- heat
- internal laundry
- bath
- near the kids school

All of which have been met in this house as it is; so we'll learn to minimalist & declutter even more extreme than we have had to in the past. Hubby is truly excited about this, as he is a minimalist at heart & abhors mess and clutter; I on the other hand, am a clutter bug & am going to find it more difficult... The kids, currently, take after me - but it will be good for them to learn to live with less. I am hoping these will be lessons that will last a lifetime for us; as underneath I am a wannabe organisation & minimalist freak... I love the idea, I just can't live it!

Anyway, it is now almost 10pm, & I think I had better start thinking about bed... Another week of work ahead!

PS - won't be using it again;  had to end up emailing it to myself & saving the photos 3 or 4 times,  and uploading the post from our tablet... never mind,  now I am really tired!
Family first home update

Amy said…
And now you are almost living in your new house! A long, stressful process I know but I hope it will feel like it's been worth the effort. I'm looking forward to seeing how it looks with that big privet thing gone in the front, and your special touches inside.
22 May 2016 at 08:40