June 14, 2017
The next day, Sunday 9th April, we got a call from Mum to say she'd taken you up to the ED for rehydration again - you were only in for a few hours, and then released. I got up for a little while that afternoon, and had noticed a big change in your overall demeanor - you seemed to have finally made peace with your future, and with what was happening. I don't know what happened, I never got to ask - but this felt like a huge break-through for me, as until that day you were still quite angry and in denial to some extent. Unfortunately the rehydration this time made no difference, and you continued vomiting and ended up back there again the next day... 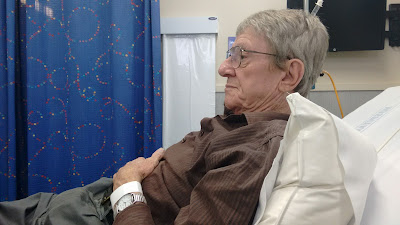 At the local hospital being rehydrated... again.

Once more the local Doctors appealed to Waikato for treatment options, and again they declined you; however this time the local Doctor was as frustrated as we were getting, and decided to take a long hard look at your file. It was then that we discovered why Waikato felt you were too fragile - not only had the cancer traveled down to your stomach, but was also well entrenched in your chest cavity, as well as nodules up and down both sides of your spine. This had been discovered in a scan taken back in November 2016 - but no one had told you, Mum, or our local Doctor; we were completely unaware of just how far spread the cancer was at that stage, and it totally sent us for a spin.

A decision was made at this point that you needed more specialised treatment than what our local hospital could give you, and with Waikato Hospital declining you again - your only other option was Hospice Waikato, in the hopes they could get the vomiting under control, and get more movement in terms of making sure you were getting the nutrients you so desperately needed. So arrangements were made for you to head up the next day, I took a day off work and we all went up as a family as well, dropping the kids off with some close friends while we got you settled in. You were still quite jovial and positive at this point, and it was decided that an NG Tube would be your best option, along with pain relief and anti-nausea drugs, and some drugs to attempt to help relax your esophagus and surrounding muscles in order to make swallowing easier. 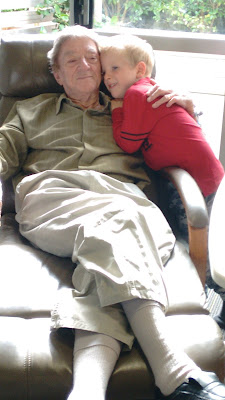 Goodbye cuddles for Pop-Pop when we left the Hospice.

Unfortunately the next two days proved quite traumatic for you, and in the end it was decided (after numerous attempts) that you just couldn't take an NG Tube either - the cancer was winning; and you were starting to admit defeat. Andrew and his family went up to see you on the Thursday, which was just before Easter... Andrew text me privately after visiting you, and said how frail you were looking - but the good thing was, the anti-nausea meds were kicking in, and you were able to start having small amounts of liquids without vomiting (which was pretty exciting).

That Easter weekend we changed our plans and came up to spend time with you and Mum (much to your relief, Mum had been able to stay with you the entire time you were there). I got such a shock when I saw you - you had deteriorated so dramatically that I didn't think you were going to make it through Easter; it was the reality kick I just didn't want to face, and I spent that first afternoon holding your hand and crying. That night I rang Brendon in Australia and told him to book a flight over ASAP, as I didn't think you would be coming home. Mum also rang one of your younger brothers; the local one was on holiday in the South Island so we let him have his holiday in peace - he'd seen you before he'd flown down, but Uncle Warren hadn't seen you in months; so Mum suggested that he made some plans to pop up after Easter and spend the day with you (which he did). 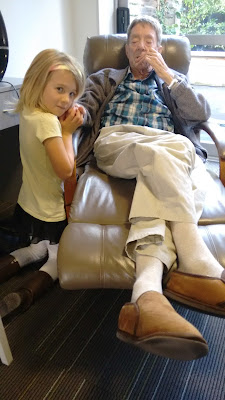 Getting more and more frail by the day...

Brendon had his eldest daughters’ wedding on Saturday 22nd April; but the night I rang he booked his flight over for Monday 24th April, and arranged to spend that entire week with you. We didn't know where you'd be by then - possibly still at the Hospice, the way things were looking. We came back home on the Easter Monday, but stayed in very close contact - expecting to be up again the following weekend. However, once they got your nausea and pain back under control, they started talking about releasing you. I was quite horrified at the thought, as you'd deteriorated so quickly - but on Friday 21st April you came home, which is exactly where you wanted to be. Unfortunately that afternoon my daughter came down with a tummy bug, so I was unable to come and visit you; and knew I would need to wait at least 48 hours to make sure the bug had passed before I could risk seeing you (it was a LONG 48 hours). But the very next day Mum rang to say she was waiting on the ambulance to take you back up to the local hospital - this time with breathing difficulties due to a chest infection.

kiwimeskreations said…
Those were fraught days - I didn't realise just how much until reading this!
Blessings
M
15 June 2017 at 19:14