June 19, 2017
Finally, on the Sunday morning; after a weekend vomit-free, I got up to see you and spend an hour or so by myself with you. You were brighter than when I had last seen you at the Hospice, so I was pleased about that - but you were obviously very fragile; however knowing that Brendon was arriving the very next day had you all upbeat and excited! You could never spend enough time with him, and always hated goodbyes - so this was a precious week.

I worked on the Monday, and popped up to the hospital that evening to see you and Brendon. Mum was up there of course, she hardly left your side - she'd even had to let go of attending Karla's wedding in Australia, because you had gone downhill so fast; and later on Amy (sis-in-law) also joined us... and it is an evening none of us will ever forget. You were in fine form, and had us and your roommate in stitches - I can't remember another night like it, but you were on a roll and happy to have an audience willing to laugh at everything you said. It turned out to be one of the last really strong memories we have of you - from there on in, you just got sicker and sicker. You convinced the hospital to release you the next day (being ANZAC Day), and spent the rest of the week at home with Brendon; by now the nodules in your back had turned into full-blown cancer (we assume), and you were in a lot of pain. You moved from chair to chair, and even lay on the floor - nothing was comfortable for long. Luke and I brought over one of our chairs for you that week, and it seemed to help briefly; but ultimately you needed to increase your pain meds, which you were refusing to do, as you didn't want to sleep the last weeks of your life way. 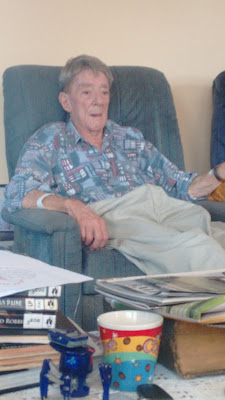 Home from your last visit to Hospital

When you first came home from the Hospice, twice daily district nursing help was put in place, as well as someone to help Mum with housework, and someone to help you with your morning ablutions. God was so good, and blessed you with amazing people - Hilary, your District Nurse, became like family; and the others were all wonderful, caring people as well. We all were feeling very loved and blessed in your final days - so surrounded by love, care and many, many prayers.

Brendon flew home on the Saturday - he said his goodbyes, knowing that it was likely the last time he'd see you alive... he and Mum found this goodbye intensely emotional, but Brendon said you appeared quite peaceful about the whole thing. We had all noticed the difference in you over recent weeks, as I had mentioned previously - it was like God was preparing you, and while I am so pleased you went in peace and not fighting; it doesn't make saying goodbye any easier at this end.

On the Sunday we had a very small combined family birthday celebration for my daughter and my nephew; Button was turning 7 the following day, and Andrew's son was turning 7 three weeks later. We had a lunch around at your place, and you were still well enough to get up and sit at the table with us, and you even ate part of a scrambled egg for lunch that day... but it was to be the last food you ever ate, and even that almost didn't go down (thankfully you didn't vomit, or I think the children and me would have been traumatised for life 😉)! We only stayed for about an hour, it was all you could handle... but I am so glad we made the effort. 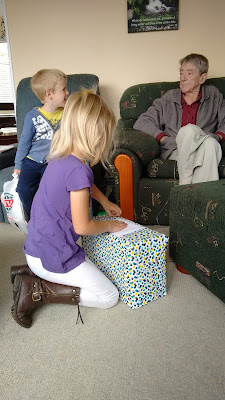 In the centre of the birthday celebrations...
Chatting with Asher. 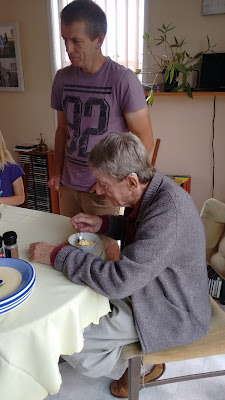 Your last ever meal... other than the odd sip of water

On the Monday Mum asked me to come and 'Dad-Sit' you during my lunch break, as she needed physio; you were lying on the couch when I got there, and basically dozed the entire time. This was quite unusual, and what was even more unusual is that you hadn't had a shower that morning, as you were feeling to frail. You never missed a shower, and you always sat on your recliner seat - so I knew things were pretty bad by then. Again, you weren't keeping anything down, and could only manage 2-3 sips of water at a time; so I ate, and chatted away to you... and you responded as necessary. 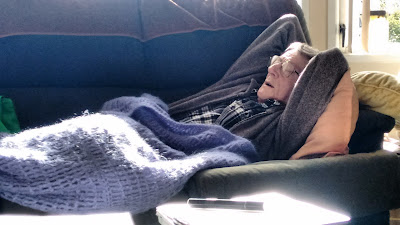 I teased you that day and told you that Dad-Sitting was a lot easier than baby-sitting!
This is the last photo I will be able to share of Dad...

The next day there was a meeting at home with a Hospice representative Sandy, Hilary our District Nurse and Mum and you... it was to decide what the next step was, you had always been determined to spend your last days at home, but we didn't know if Mum would cope. I took time off work to attend this meeting, and Luke also came as support - he has been amazing throughout all of this, and has done as much as requested, or stepped aside, as necessary. Basically the decision had to be made as to whether or not to keep rehydrating you, or to let you slip away at home in peace; unfortunately the laws have tightened up so much, that you're no longer allowed to have a drip at home without specialised 24 hour care; it is ridiculous. So if you chose to continue to be rehydrated (you were well past the point of food by now), you either had to go back into Hospice, or keep going up to the local hospital every time you needed fluids... Neither of these options appealed to you, and the Hospice Rep wasn't very helpful either and said she couldn't guarantee you a bed there. Again you had not had a shower that morning, and at 10am were still in your pajamas (which was unheard of), throughout the entire meeting you keep dozing in and out, and although you heard everything, you didn't really say much.

I guess I was still trying to fight for you to live, as I know I was a bit pushy - the professionals obviously knew you didn't have much time left, and Mum knew you wouldn't have even handled to trip up to Hamilton. So the final outcome of this meeting was to double your pain meds, arrange for a Hospice bed to be brought around and set up in the lounge for you, and to try getting fluids into you directly under the skin - instead of a drip (which didn't work as your skin was so thin and frail). I had a quiet chat to Hilary and Sandy after the meeting, and asked them how long they thought you had now you had made the choice to just go naturally; no more medical intervention, and they told me generally 10-14 days as a basic time frame, but everyone was different. When I went back to work, I told them that while I would do my best to put in as many hours as I could that week; no matter the situation, I was going to be unavailable the following week, as I wanted to spend as much time with you as possible.

Doubling the paid meds seemed to bring you instant relief, and that night you were feeling well enough to go and sleep in your own bed for the last time - you and Mum had a deal though, that once you were sick enough to stay in the Hospice bed, she would sleep with you in the lounge, as you didn't want to be left alone.

The next day I went off to work as per normal, and generally I take my mobile phone with me EVERY WHERE just in case... but that morning I left it on my desk while I popped down and grabbed my morning cup of coffee. When I returned I discovered I had missed two calls in under 10 minutes from Mum... my heart sank, and I rang her back with trembling hands.